When I’m stuck on what to write in my weekly blog, it’s good to take a step back and look into your own past experiences instead of scouring google and the internet for inspiration.  Today I looked back 20 years to when my dad was a long distance lorry driver and he whisked me off on his long journeys across the UK.

When watching the world go by out of the cab window, observing the country’s landmarks (because these were the days before the iPad and Nintendo DS) did I get excited at seeing Stonehenge? Nope! How about Tower Bridge or Big Ben or the Angel of the North… no I didn’t, but when it came to the part of the day when the old man got a little hungry, that’s when the real fun started.

We used to trawl the city’s back streets to find the closest ‘Greasy Spoon’ – the working man’s café. Now don’t get me wrong, I used to love spending time with my dad on the road but if it wasn’t for the breaks for the greasy food, I probably would have stayed at home with mum baking cakes instead. 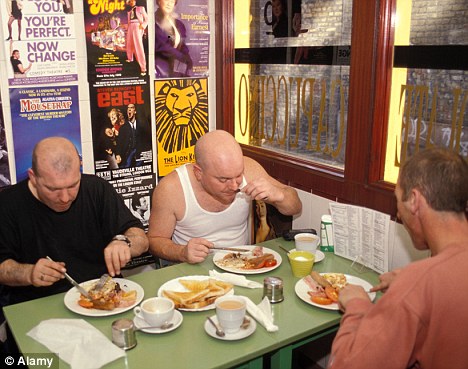 The smell was enough for me… the smell of burning bacon and the frying of oil.  I think the smell was ingrained into the café furniture; even the cafe chairs had an egg type fragrance.  This was it... the part of the day I enjoyed the most.  I used to look at the men with their hi-vis gear and hard hats on and want so badly to have one of their hard hats to wear.

As I walked to the counter holding the old man’s hand, seeing the lady behind the counter slap the last rasher of bacon on the working man’s monster breakfast, I thought to myself, I can’t wait until I can eat one of them.

I used to stick with my favourite… the classic bacon and egg sandwich.  What stands out in my mind the most is the café tables and cafe chairs with the red and white squares as the décor.

After eating my body weight in greasy food, it was time to leave.  The great thing was you could still smell, and ever so slightly taste, the aroma of the ‘Greasy Spoon’ back in the lorry and that would last until we reached the next ‘Greasy Spoon’ for tea.